Comments Off on Out of Africa 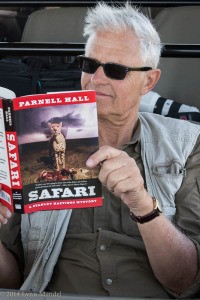 I’m back from Bostwana. While I was gone my book Safari was published, and Marilyn Stasio gave it a good review in the New York Times. Coincidence? You be the judge.
It was a fascinating trip. I’d never seen wild dogs before. They look just like normal dogs, only with big ears. The cubs are very cute, but the dogs are fierce hunters. We tagged along as a pack of wild dogs chased down a herd of impala, preying on the babies. In the course of an hour they brought down seven.

Our tour leader and photographer extraordinaire Grant Atkinson lined up the shots for us, positioning the jeep in exactly the right spot to photograph the animals. He seemed to be able to anticipate where they would go and what they would do. But I think even he was surprised when the nice portrait of a leopard in the grass he had set up suddenly turned into an action shot when a full-grown male reedbuck wandered onto the scene.

My adventures on safari

The great thing about writing a book about Africa is you have to go there. I went to Zambia and Zimbabwe last summer, for the most exciting hiking/canoeing safari you could imagine. Well, that’s not true. Stanley and Alice actually have a more sensational trip in my new private eye novel, Safari, but that’s fiction. Even without murder and mayhem, the trip was something special.

You’re not in a jeep. You’re just following the trail, minding your own business, and suddenly you walk right by a lion. What is the proper etiquette in that situation? I know screaming and running is frowned on. Or insisting on being introduced. But what would put the lion at his ease?

I am sure that whatever I’m going to write, no one will want to read.

I never had a blog because you have to write it. Which means you have to know something. I don’t know anything, which leaves me at a disadvantage. However, my new website has a space for a blog, and if I left it empty people would notice.

I am sure that whatever I’m going to write, no one will want to read. I find this depressing. No one will care, my website will be a disaster, my publishers will become discouraged and drop my series, I’ll never get another book contract and I’ll have to go back to working job-jobs like in the bad old days. Such jobs were unskilled, low-paying, and dead-end. For instance, I once sold plastic Ziplock bags, the type drug dealers used to sell cocaine in. I sold them empty, and couldn’t understand why they didn’t sell. 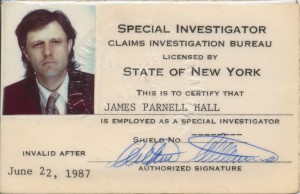 Parnell rarely flashed his private investigator ID, and for good reason. Look at the photo. Would you let that man into your house?

I also worked as a private investigator, where I dealt with people whose bags were full, and in the slums and crack houses where I plied my trade I was always afraid someone was going to mug me for the money to replenish their stash.

Anyway, what I’m writing now is exactly what no one will care about and will lead to the end of my career. However, for my upcoming book Safari (and look how long I held out before I mentioned it), I went to Zambia, and have a bunch of neat pictures of wild animals. I’m going to post one, just as a teaser. And if I don’t get booed off my own website, I’ll post more photos from the safari with stories of how they came to be taken. 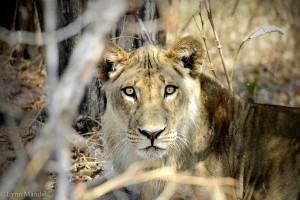 If you like this blog, you’re easy to please, angling for a free book (which is not forthcoming), or not particularly discerning. Keep coming back. Tell your friends, if any. And like me on Facebook, or however that works. I still can’t figure out how to tweet.